Full disclosure – I have yet to visit Paris.

I know, I know. How can I have lived in Europe for 6 years and not have visited Paris?! Well, I guess I’ve just had other places on my list. And I’ve also heard some not-so-attractive things about the city of love, so maybe that has stalled me a bit. Regardless, Netflix’s newest hit ‘Emily in Paris’ slapped me in the face with their marketing and I heard some interesting tidbits from friends, so I decided to dive right in.

Overall, it’s a light and fluffy show that’s easy to watch and doesn’t take too long to get through. There are only 10 episodes in this first season and I finished it in one day because I was curious to see Emily’s character development. As a fellow American Ausländer in a European country (who also works in marketing), I was interested to see what their interpretation was like. Of course it was injected with more drama, ‘chance’ meetings, romantic entanglements, over-the-top characters such as Pierre Cadault, and many stereotypes to go around, but I did appreciate some of the smaller details they threw in there. Emily struggles through the whole series trying to learn beginner French, she has trouble making friends (for about one episode only but OK), she makes cultural mistakes (mistaking the 4th floor for the 5th floor, knocking back champagne like shots, being shocked by nudity), but she perseveres. That’s how many of us do it while living outside our home country, so there were definitely some relatable moments.

Without further ado, here are just some of the thoughts that went through my head while watching Emily in Paris.

I really could not believe his flimsy excuse for not coming to visit her. “I can’t do long distance.” Ummm, excuse me?? She’s there for ONE YEAR. Those of us who have been in long distance relationships for longer periods than that or those who have had relationships where it was unclear if/when we would get to live with our partner are laughing in your face, bro. It’s not that difficult when you can visit each other a few times per year – which they already planned to do in the show – and when there is an expiration date on the long distance. Get out of my face, Doug. (I had to look up his name just now.)

My friend and I agreed that he’s a more handsome (and younger) version of Armie Hammer. Sorry Armie. She sent me this photo and it pretty much sums it up. 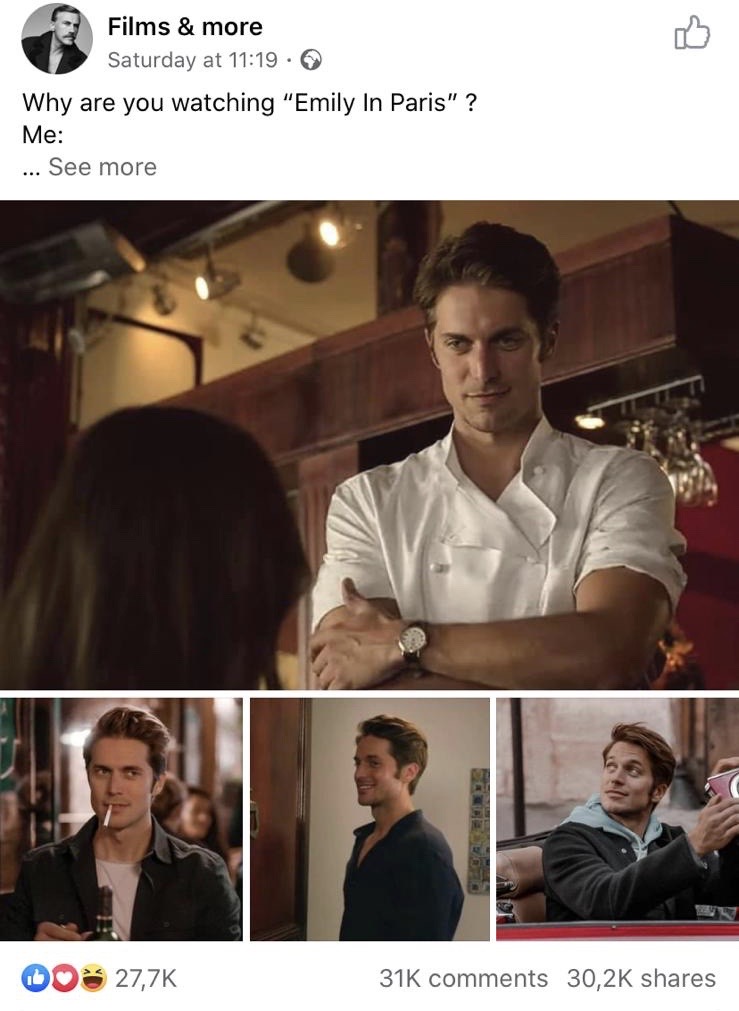 “You came here without knowing the language…” WE GET IT!

How many times do they want to nail this point home? As many of us know, it’s perfectly possible to get a job in a big, international city without knowing the language at first. Even when Emily starts making an effort to start learning the language and tries to incorporate it into her speech, she’s still told she’s not trying. Sorry, girl.

Did anyone else think Camille and Gabriel were going to invite Emily to be in a throuple in the beginning?

I truly thought the show was going in this direction for about ten minutes. She meets Camille in the street and they immediately hit it off (not that relatable, TBH) and then Camille kisses Emily on the lips when they say goodbye. Emily is a bit shaken by it and says, “Oh! I’m sorry,” to which Camille replies, “I’m not.” They kept talking about sex throughout the whole show, so this is where I got the throuple energy, but alas, it did not happen.

If the gender roles were reversed, we wouldn’t be thinking it’s so funny, huh?

Also, there’s one scene with the two of them where ich hab’ mich tot gelacht. Here’s a screenshot of what I told a friend about this scene. If you know which scene I’m referring to and agree, we can definitely be friends.

Mindy is a queen

Not only is she multilingual and has the voice of an angel, she’d rather make something of herself on her own merit rather than inherit her parents’ money and live the life they have laid out for her. She lives for the tea from Emily’s personal and professional life and gives sound advice when needed.

They did Camille dirty

Our girl Camille is also a queen – she’s beautiful, kind, intelligent, passionate – and Gabriel and Emily royally slapped her in the face.

Is she really the villain, actually? I guess it’s hard to have a show without one, but I also wouldn’t describe Emily’s learning curve surrounding French culture the villain of the show, so I guess that leaves Sylvie and her sometimes harsh attitude. But can you really blame her for the way she acts and disregards Emily, at least in the beginning?

Despite Sylvie’s thinly veiled disgust of everything Emily stands for, our feminist always followed the girl code (well, sort of)

As soon as Emily found out about Sylvie’s affair with Antoine, she did everything to stay out of Antoine’s wandering eyes. She strove to keep things professional with him when he was clearly being flirty. She always tried to warn Sylvie when Antoine and his wife appeared unannounced. She tried to comfort Sylvie after it was revealed that Antoine would take his wife to St. Barts instead of her. And of course in episode 3, she stands up for what women want outside of the male gaze.

Is this a hot take? Because quite a few people I know have said this show is too cringey to watch. Even the top news story for me when I google it is from the Berliner Zeitung and reads Die vielleicht dümmste Serie in der Geschichte von Netflix (Maybe the dumbest show in the history of Netflix). But despite that, the overall reviews for this show are overwhelmingly positive. The audience ratings on google give it an average 4.5/5 stars with nearly 5,000 ratings.

There’s a learning curve for everyone who moves to another country and has to learn some of the cultural ticks, even small ones. But that doesn’t make someone dumb, does it? I didn’t get the feeling that Emily was supposed to play the ‘dumb American’ trope, but rather that’s what the characters just threw onto her because she’s a social media strategist and wants to share new ideas they’ve never heard of. Of course some clichés are played out and some stereotypes are pushed (Can I speak to the chef?), but not to a degree that made the show unwatchable for me. But maybe you think differently if you actually live in France/Paris. The show may not have been 100% accurate, but some parts are relatable and the rest was pretty cute, which is just what I needed to escape for a few hours.

My aim is to give you some ins and outs on learning the German language, living an international life in Germany, and some personal insights on Hamburg and life in general. Some other quick facts about me: I like to go to new cafés with friends, try new art mediums, and always have a third point when I'm listing things.

What did you think of the show?? Are you hoping there will be a season 2? I am, but definitely not just to see more of Gabriel…

Is it problematic that my social media is a highlight reel?

Language and relationships: why is it hard to switch languages once you’ve established one?