Power Frau:
Stella is frank, frech, and feeling it

How can I begin to describe Stella? Put simply, she’s that cool girl you wish you were, but know you’ll never be. The most you can hope for is that she finds you interesting enough to hang around so that a little bit of her swagger may rub off on you.

With Singaporean roots, Stella has been in Germany for nearly 7 years and in Hamburg for 2 of them. She’s working in Sales Development for a cloud services company. When she’s not working or taking your man, she might be going for long walks (thanks to the panny), brewing kombucha, watching films, sewing, reading, and everything else in between.

What initially brought you to Germany? And is it why you're still here?

A plane – no, I kid. I moved here for my Bachelor’s degree. I like the style and the pace of life here.

What do you love most about living in Hamburg/Germany?

What’s not to like? I love that Hamburg is mostly such a clean and tidy city (except the days after it snows) and that the locals take a lot of pride in living here.

If you could change one thing about the expat/international life, what would it be?

The “extra”-ness of it all. I don’t particularly subscribe to the idea that being an international has to be this Special Thing. In my opinion, what’s most important is the narrative I create for myself. Sure, I’m international, and sure, there are some areas I will never 100% be integrated into, but I guess that makes things interesting for me and the connections I make.

With that being said, there are definitely certain hurdles to overcome, especially if you’re coming from a whole different culture and not knowing the language. There are some things to laugh about the whole “international experience” and being an expat, but when it comes down to it, I try to focus more on the individual relationships and connections that I have with different people from different backgrounds (regardless of expatriate status) and less of the whole shebang of being an #expat. Talk about a #controversialtopic. Maybe it’s because I’m an Aquarius. But I kid. 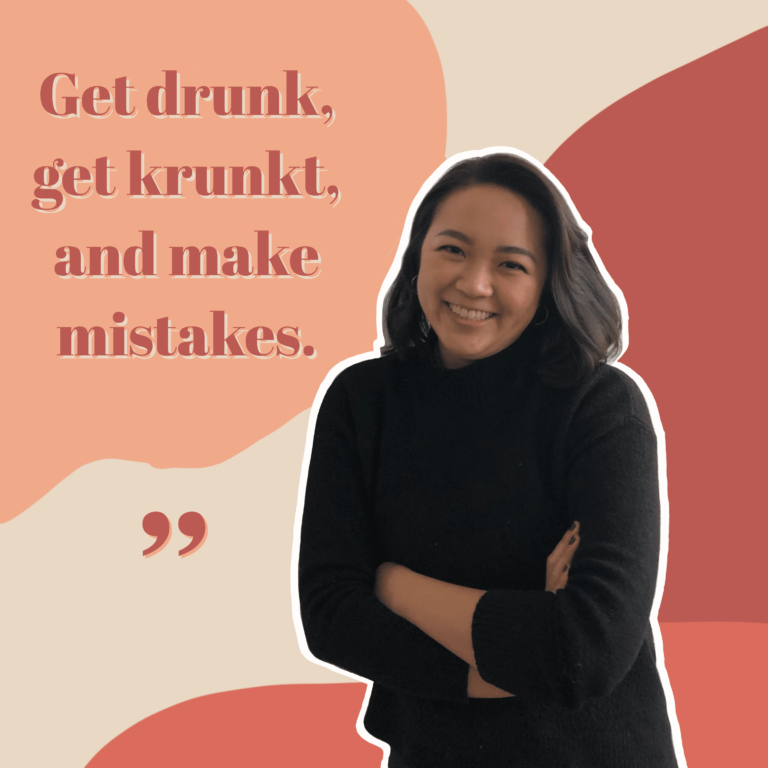 What is the hardest part about living in Hamburg/Germany?

I’d have to say being far away from my parents. Aside from that, it is really difficult to get the food from where I’m from.

Also, winter depression can be a real pain in the ass. Take your vitamins, kids!

Let's talk about your German language-learning journey. How did you start, how has the process been, how do you feel about your abilities now, etc.

I started learning German in high school as a part of a third-language programme (the first two languages being English and Chinese). My older brother was definitely a big inspiration in my decision to take up German because he would go on these really fun student-exchange programmes to different German villages practically every other year, and I was always really jealous of that.

As with most things, learning German was difficult at the beginning. To be honest, even after 6 years of high school classes, I can’t say that I was able to hold a proper conversation in German when I first moved here.

It’s definitely a process, but with an outcome well-worth the struggle, especially when you can finally argue your way through any German bureaucracy to get exactly what you want.

I exist between two strange worlds – the world of a DAF-ler, where everyone’s really impressed with my command of the language, and the world of a “Your German sounds pretty native, but if you’re really German, then your German sucks.” Good days and bad days. It’s hard not to take it personally, but c’est la vie.

In hindsight, do you feel like learning German in school gave you a clear advantage?

It really helped with the initial fear of speaking and communicating as I knew that in some dusty-ass corner of my brain there was a little box marked “Das ist Deutsch und Deutsch macht Spaß” with all the grammar rules and limited vocabulary that I could fall back on.

What didn’t help was when I was sitting in German class in college with all these other students going “Ich lerne Deutsch seit zwei Monaten.” and getting better grades than my “seit Sechs Jahren” ass.

Tell us about a time where you said the wrong thing or misunderstood something in a funny way.

Gosh, when have I not said the wrong thing.

I remember back in high school for our oral examinations, we were graded on how fluently and enthusiastically we could talk about a given topic. For one section, we had to talk about a topic drawn out of a bowl for about 7 minutes with as few prompts as possible. I got “Essen” as a topic, so I decided to talk about seafood. I basically remembered that the German word for seafood was “sea”+”fruits”, so I literally talked for 7 minutes hyper-enthusiastically and non-stop about how great “Meeres-obst” is. I thought that the fact that the examiner was smiling the whole time was a good sign, until he said “Meinen Sie eigentlich Meeresfrüchte, Frau Tay?” Safe to say that I died right after that comment.

Got any tips for learning the language from a seasoned learner such as yourself?

Real advice though? Get drunk, get krunkt, and make mistakes. Trust your brain, she knows more than you give her credit for.

I usually tell my German friends to correct me in a specific way – I’m quite sensitive to feedback on my grammar/vocab mistakes, but most of my friends know to basically repeat what I’ve said back to me in the correct form and in an agreeing way. Talk about true friendship. 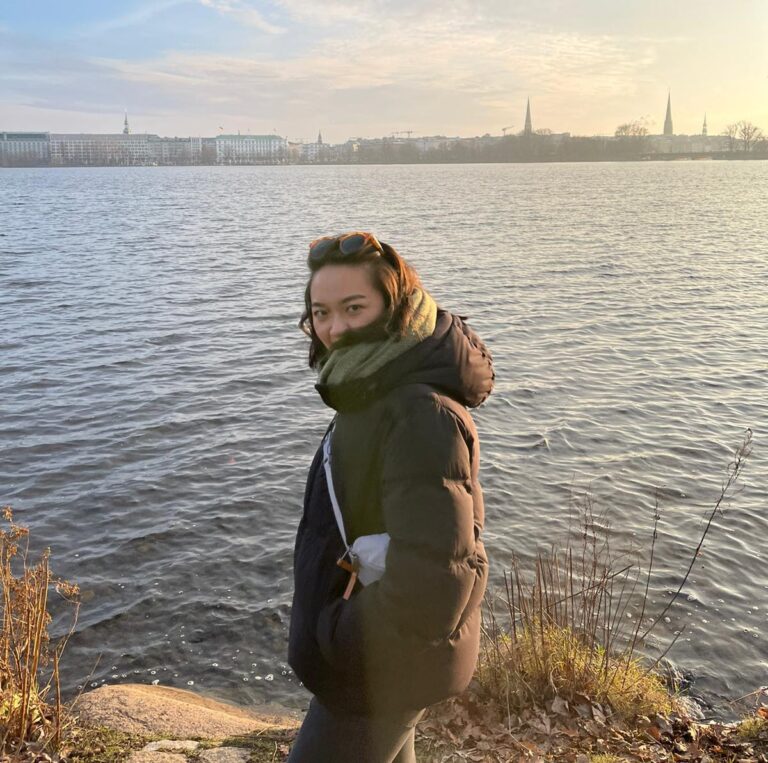 How do you find living in southern Germany vs northern Germany? Are there marked differences and do you prefer one place over the other?

Well, there are some differences, but I can’t exactly put my finger on them.

It’s more of a small city versus big city comparison for me – I studied in Freiburg like you did, klein aber fein. And Hamburg is definitely bigger, but I’d say they are both vibrant and lively in their own way.

Radiergummi. I love this word long time. For some reason, it sounds so well-rounded and smooth, and I immediately have an image of this trusty worn down eraser that never really gets smaller, no matter how much you’ve used it.

I hear you’ve dabbled in the German dating scene. Do you have any tips or advice for other people just starting their German dating experience, especially when it comes to apps and the digital era?

I’d say be as frank and frech as possible. Also, hope for the best but expect the worst. Also, stay away from clichés (I’m looking at you, #NordLicht and #HamburgerJung), unless you’re into that.

Know when to say enough is enough, and know that it’s absolutely okay to take breaks – dating can be terrible and tiring, but I’ve definitely met some cool people and have had some pretty sweet encounters through the apps. It’s definitely a process. I would honestly love to meet people under different circumstances, but for now, as the situation demands, the apps will have to do.

As a side note, check out @humanitariansoftinder, if you don’t already know it.

Finally, in your opinion, what makes you a Power Frau?

I guess waking up every day and hustling the good hustle. Over the years, I’ve been trying to maintain a “Do no harm, take no shit.” stance and that’s definitely worked in making me a strong Power Frau contender.

Sometimes I look back, and even I can barely believe the things that I’ve been through to get to where I am. It’s definitely a good feeling to acknowledge that I’ve survived 100% of the bad days and that I’ve emerged stronger after every struggle. Print that on a t-shirt. #livelaughlove

My aim is to give you some ins and outs on learning the German language, living an international life in Germany, and some personal insights on Hamburg and life in general. Some other quick facts about me: I like to go to new cafés with friends, try new art mediums, and always have a third point when I'm listing things.

Follw me on instagram! Trust me, we have fun there.